Era Tides is a community-made Crazy Map created by Theoquertz. It has 6 standard buttons & 4 group buttons, and is playable in FE2 Community Maps.

Era Tides is located on an island that was supposed to be a relaxing place for family and friends to enjoy. Unfortunately, the volcano has erupted and you must escape and reach the big clock tower before the lava catches up to you. As you can see, there are many destroyed platforms and buildings, possibly because of the eruption of the volcano. In this map, it also features ziplines, sliding sections and rescue missions. While playing through this map, you will notice that there several clocks and that it's raining. Before the revamp, Era Tides used to be located in a large chasm instead of an island.

Old Backstory (Last edited 2020) - Fiestas may be nice and fun, having a celebration may be allowed but yes, this pandemic caused us to stay away by a meter, causing the mayor of this place to forget to pay the taxes and fix the electricity, water tanks, etc. the time to pay is at the limit of 2am, but the mayor failed the community, the electricity and water fuses as a team, RUN, ESCAPE THE PLACE BEFORE THE ELECTRIC WATER CATCHES YOU!!!

Revamp Backstory - Welcome to the Island of Relaxation! Where you could relax and have fun with friends & family, but what happened? Why is the place shaking? It’s the volcano, escape & reach the lighthouse before the tides of lava catches you! Too sad, the Island has begun end of an era.

Updated Revamp Backstory - Vertigo City aftermath, you’ve escaped the disaster and reached the Island of Relaxation! Where you could relax and have fun with friends & family, but you already know what happened which is the disaster of Vertigo City and it’s no fun. Why is the place shaking? Will the island also start it’s own disaster? Well in case another one happens escape & reach the top of the tower before the tide of lava catches you! Too sad, the Island also begun the end of its era.

DISCLAIMER #1 - IF YOU DON’T WANT TO READ THIS WATCH THE WALKTHROUGH VIDEOS INSTEAD.

DISCLAIMER #2 - THIS MAY BE OUTDATED DUE TO CONTINUOUS UPDATES BY THE CREATOR.

You start the map by spawning on a sandy hill. You walk down the hill and then jump onto a raised platform above the sand. You then jump onto another platform and go around or over a few stacked boxes. After you jump onto a platform against the slate wall and jump on a box, then another platform to hit button 1. Then you jump back down to the platform with the boxes and if you clicked the button a bunch of wood platforms should have appeared. You jump across them over to a second button. Then you go and jump up a truss onto a piece of terrain with a few boxes on top. Jump on those boxes, then onto another platform. After this take a long jump onto a wood platform. Then you jump onto I giant piece of terrain, then onto and over a few platforms to press button 3. Then you jump onto a pole and cross onto another pole on a skinny plank. You do this again and then jump onto a wooden platform. After this you slide under a doorway and go into the next area. After going under the doorway you go left and jump onto a zipline. The rescue mission takes you downwards over lava to a chunk of terrain you jump across over to a corner. In this corner you will see a piece of terrain that you jump on. The you leap onto a platform. Then you parkour over to a slate platform. After preforming two wraps and and two long jumps you press button 4. After this you go down to the chunk of terrain you see after the zipline and jump across two skinny platforms. After you jump from the second platform you jump up a truss onto a small floor. After this you do a wall jump pattern like the one in Blue Moon. After this you climb a fallen pillar that is leaning on another pillar that is standing straight up. On to of that pillar is a zipline that goes over lava onto a piece of terrain. Once you land you walk across the terrain and jump on top of a box, then proceeding to do three more jumps between two tall chunks of terrain. Then you land onto another piece of terrain and climb a truss to a higher area on the terrain. Then you jump onto another fallen pillar and click button 5. After this you backtrack to the three jumps. On the second one a truss should have appeared and if so, you climb up it. Then you jump down onto a piece of terrain and take a zipline onto a sandy island. Here you click button 6. After clicking the button you turn around and jump onto a wooden plank that juts out of another spot of terrain. Here you jump over a completely horizontal pillar and jump onto two platforms that should’ve appeared. Once at the top of the terrain that they are mounted on you jump on a few boxes and then a few more platforms to get higher up. After a few platforms you press button 7 and then drop back down to the terrain that lies after the 6th button. A large little island should have appeared and you jump onto it, then onto a truss, and then slide under a doorway into the next area, which is the lighthouse. After sliding under the doorway you go into a corridor. You jump over a few boxes and then do a few jumps onto the other side of a gap in the middle of the hallway and click button 8, which sits on a slide area. After this you slide under the doorway and do a few wall jumps into the tower section. The rescue escapee will be located under a bit of acid right below the floor of the tower. After doing the wall jumps into the tower, you will jump on a few wooden platforms that go around a pillar in the center, resembling a staircase. After doing 4 jumps you climb a truss, jump onto a box, and click button 9. Then you jump back down and then start climbing another set of wooden stairs (that are broken). You jump across about 7 times before you press button 10. Then you continue your journey up the tower and then you reach a skinnier part of the tower. You continue climbing up the and then reach an area with trusses all in a 360 degree formation. You climb one and then reach the end of the map... 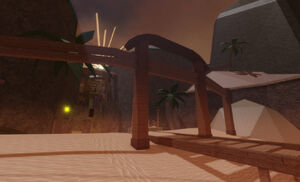 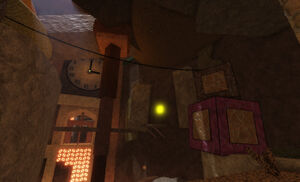 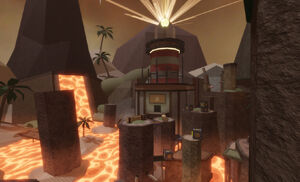 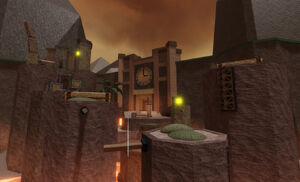 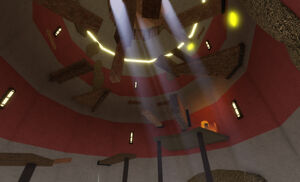 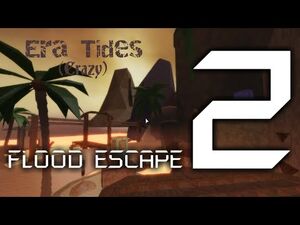 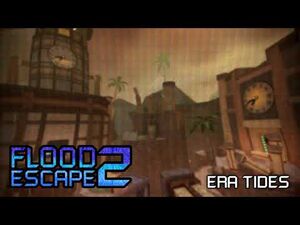 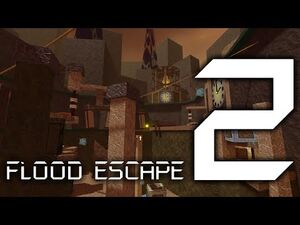 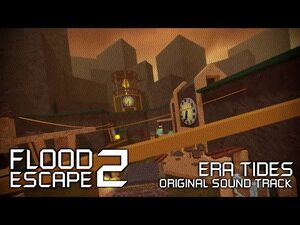