1 Solo
Up to 50 Private Servers

FE2 Community Maps, or FE2 CM (formerly known as FE2 Map Test), is a game where players can test maps that were not approved by Crazyblox to be added in Flood Escape 2. These maps are by other players who whitelisted their maps so that they could have a chance to be listed in the game. The older version of this game was called FE2 Map Test and can be found here. 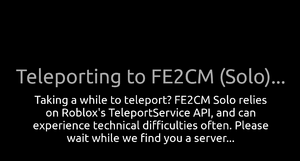 Loading screen while waiting to be teleported to a Solo-Server

The Community Maps lobby is similar to that of the regular FE2. The lobby has a brushed gold color scheme and does not have the Leaderboard and podiums.

This section of the page contains information about each major change in FE2 Community Maps. Sometimes new features are brought over to this game first so that maps can get used to them. Not all changes are listed here.

On August 2018, Crazyblox decided to abandon the user FE2_MapTest along the community map testing game owned with it. Major changes were made and are found below:

In late 2018, Crazyblox introduced EventString, announcing the deprecation of EventScript in favor, due to concerns about the game’s security and the introduction of blocked phrases that prevent EventString from running if said phrase was found. This was later reversed as Crazy reconsidered the action.

In April 2019, the lighting engine was changed from Legacy to Compatibility, as the Legacy engine was being phased out of Roblox itself in favor of more realistic engines, before being changed to ShadowMap in the same month.

On April 4, 2021, Numbered IDs no longer work and you can only use the shorter, randomly generated IDs. This update included UI changes such as the map difficulty and time at the top of the screen. Mobile UI changes include the Emote & Aim Lock buttons being put at the top of your screen.

On April 9, 2021, FE2 Community Maps was enabled for Xbox One players.

On July 9, 2021, The game has been updated to the latest build of FE2. There is now an option to force rescue missions while playing a map with rescue mission enabled. Map Voting no longer requires the "All Maps Access" gamepass when unlocking maps. The Map Voting also now displays a maximum of 9 maps to vote.

On July 11, 2021, There is now a new feature called the 'Load All Scripts' option where server owners can load maps with all scripts after reading a warning regarding server stability. The Camera FX while riding a zipline will no longer apply to ziplines that take less than 2 seconds to travel on. Server owners can also set the max player count up to 50 using the new 'Max Players' option. Loading timeouts has been removed while the prolonged loading message has been changed to “Loading is taking longer than usual and may cause you to start the round late.”

On July 12, 2021 The game has been updated to the latest build of FE2, which includes the reduced CPU usage. On/Off toggle for options in load maps menu now uses ✅ and 🟥. The icon of the Shiftlock has also been changed and the camera no longer shifts to the side when Shiftlock is activated. When near a zipline, it will now display a small menu showing its travel time.

On July 13, 2021 The Map List Window now displays how many maps are loaded in the title. Maps loaded with an instance count higher than 8k will now display a 🧬 symbol to signify the map may run poorly on lower end devices or mobile, while maps loaded with scripts removed by FE2CM will now display a ⚠️ symbol to signify a duplicate EventScript/LocalEventScript was removed or extra scripts were removed with ‘Load All Scripts’ option switched off.

On August 2, 2021 There is now a new difficulty called 'Crazy+'. The difficulty is intended to separate easier Crazy maps from the more difficult ones. This difficulty is exclusive to FE2CM and will not be added to the main game. Its intensity is 6. The sound of the Intermission has also been changed.

On April 13, 2022 The color scheme of the lobby was slightly changed, along with the logo's color changing from grey to brushed gold. You could now also equip the gamepass items you own in the main game. Crazyblox mentioned that he would love to make normal items compatible with CM. But unafortunetatly, he can't share DataStores beetwen different universes

When you are in Roblox Studio and your map is complete, select all of the parts of your map with the following shortcut (Control or Command + A, this is optional) and group them with the following shortcut (Control or Command + G, this is optional). Make sure EventScript/EventString, Spawn, ExitBlock, ExitRegion, Air Bubbles, and the Settings folder are a direct child of the model. Next, right click the model and click Save to Roblox. Name the model (this may be automatically filled with the model’s name on Studio), enable Allow Copying, and post the model. You can insert LocalEventScript and additional Lighting properties, but these are optional.

After this, find your model, copy its ID on the URL address, enter Whitelisting : FE2CM, paste the ID in the box, and click Submit Map. A message will appear indicating a successful whitelist. If the queue is full, try again in a few days.

The design of the whitelisting game is the Crazyblox Logo in 3D and spinning, with a text box and a submit button, the Background is Flood Island but it's too hard to clearly see it, and the Lift OST and the Teleporting to FE2CM Solo sound are played in the background

Note that Crazyblox forgot to rename the ingame title, this still contains the "Map Test" word 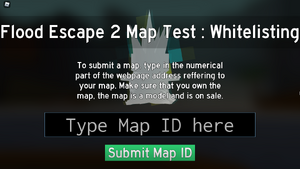 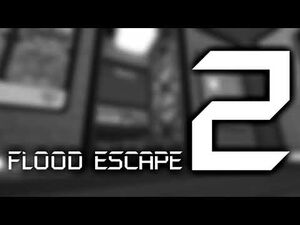