hgjo6r1 (V2)
cedsdb2 (Current Version)
Jungle Inferno is a Crazy map created by disney12. It has 6 standard buttons and is currently playable at FE2 Community Maps.

Jungle Inferno is designed around a temple/forest that is currently being burnt to a crisp, which is the reason why it is called "Jungle Inferno". There are only 6 buttons, but most of them are incredibly hard and are very risky to hit. There is mainly only one material for the bricks in the temple. The design is very consistent and is quite simple and keeps the same theme all the way through. There is a part where you need to jump on a tilted pyramid or just a plain box (depending on the version you are playing) and jump into the pool of acid and swim DOWN to survive.

Jungle Inferno had received a revamp, which was completely made from scratch. This was a controversial update, as it received numerous backlash from the community. This was later removed and never resurfaced.

As a second attempt, disney12 again updated the map. This time, combining both the original and v2, shown by their presence. This was another controversial update, receiving more of the same complaints people had when they tested the map. 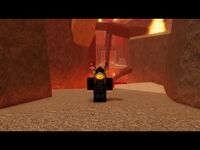